What is the UV index? An expert explains what it means and how it’s calculated

You’ve probably seen the UV index in the day’s weather forecast, and you know it tells you when you need to cover up and wear sunscreen.

But where does that number come from? We produce it at the Australian Radiation Protection and Nuclear Safety Agency (ARPANSA).

It’s our job to help keep Australia safe from all kinds of radiation, and that doesn’t just mean nuclear reactors and mobile phone signals – it also means radiation from the Sun.

Australia has one of the highest rates of skin cancer in the world, accounting for about 80% of cancers diagnosed in Australia each year. Most skin cancers are caused by exposure to UV radiation from the sun.

What is the UV index?

The UV index tells you how much ultraviolet radiation is around at ground level on a given day, and its potential to harm your skin.

UV radiation is a component of sunlight that can cause tanning and sunburn in the short term. In the longer term, too much exposure to UV can cause cataracts and skin cancer.

In 2002, the World Health Organization devised the UV index in an effort to make people around the world more aware of the risks.

What is UV radiation?

The Sun showers Earth with light at a huge spectrum of different wavelengths, and each wavelength can have a slightly different effect on human skin.

An important part of the spectrum is ultraviolet or UV radiation: light with wavelengths too short for our eyes to see, from around 400 nanometres to 10 nanometres.

How is the UV index calculated?

The UV index takes into account how much UV radiation of different wavelengths is around and how each of those wavelengths affects our skin.

ARPANSA has a network of sensors around Australia measuring sunlight at different wavelengths to determine the UV index, with the information available online in real time. 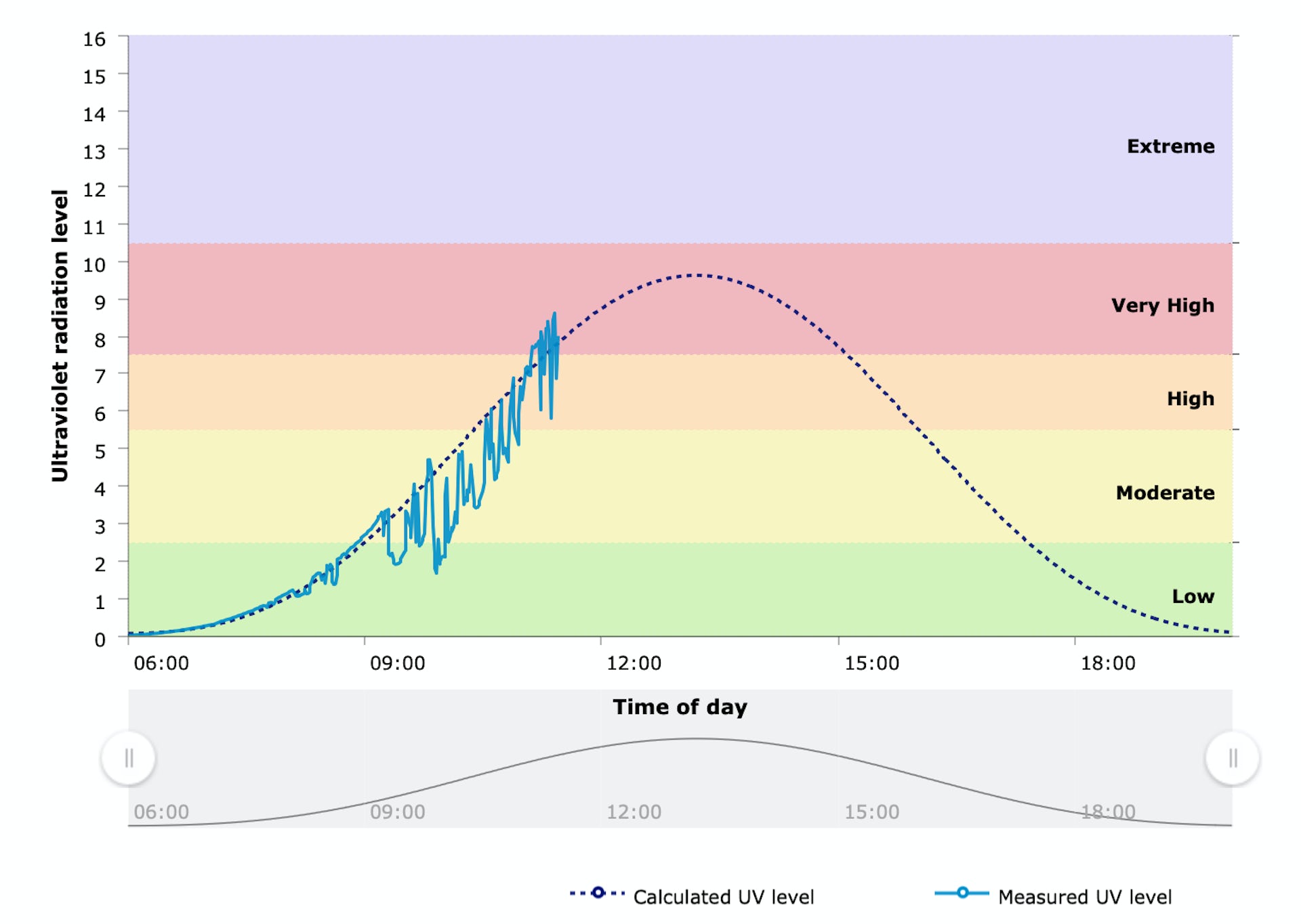 Real-time data shows how the UV index rises and falls over the course of the day. ARPANSA

This data is combined with other information about location, cloud cover and atmospheric conditions to produce maps and forecasts of the UV index for the whole country.

How are UV levels different around the world?

The UV index you see reported is usually the daily maximum – that’s the highest it will be all day.

How high it gets depends on lots of factors, including your location, the time of year, the amount of cloud cover, and ozone and pollution in the atmosphere.

The index tends to be higher closer to the Equator and at high altitudes, as the sunlight has to pass through less air before it reaches the ground.

People often experience the sun in Australia as particularly harsh, compared with places in North America or Europe. In a British summer, for example, the maximum UV index might be between 6 and 8. In an Australian summer it can range from 10 to 14. 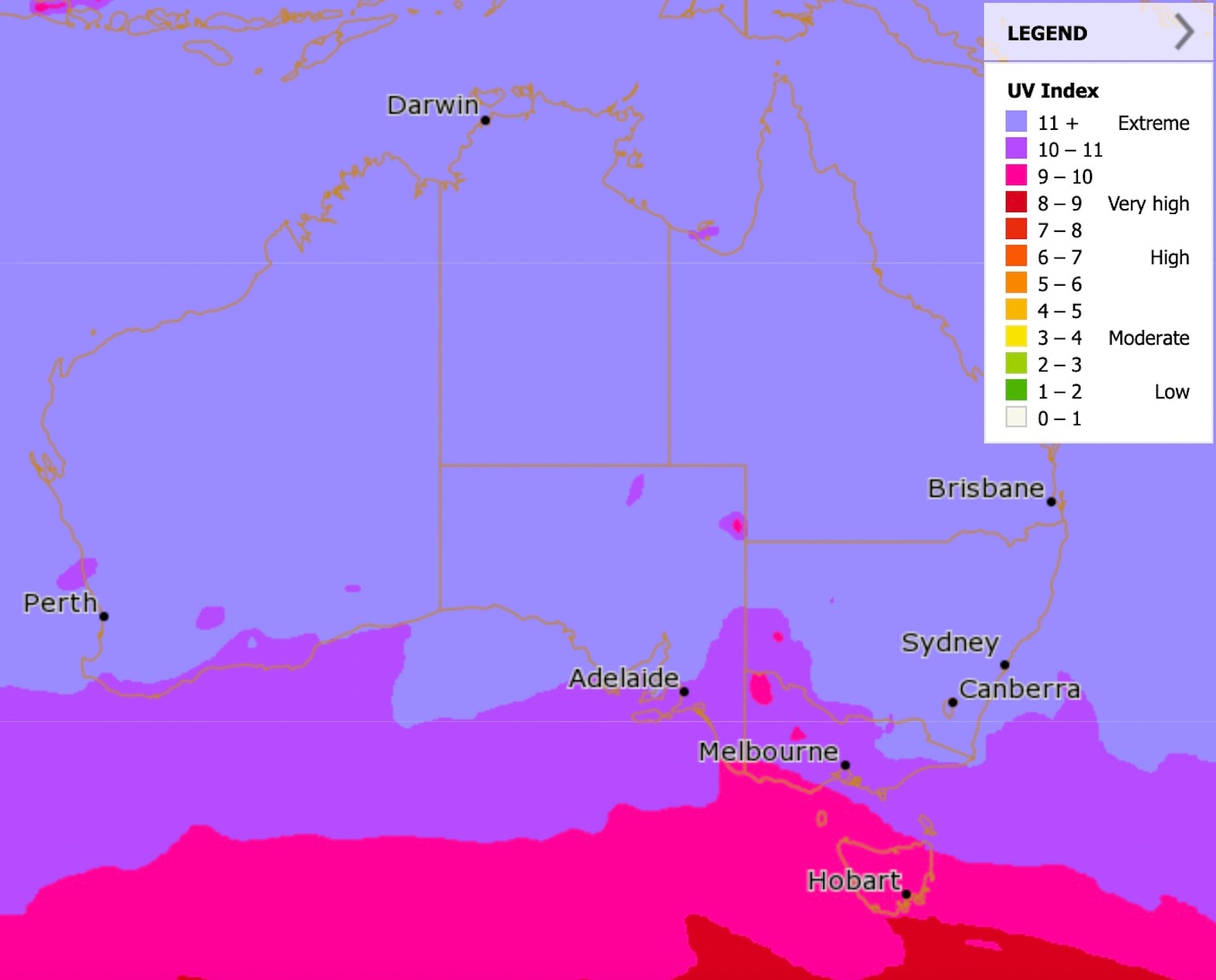 There are a few reasons for this. One is that Australia’s cities are closer to the Equator than many big cities in Europe and North America.

Another is that Earth is very slightly closer to the Sun in the southern hemisphere’s summer than the northern summer, meaning the sunlight is a few percent brighter.

A third reason is the “hole” in the ozone layer. The layer of ozone in the upper atmosphere, which absorbs some UV-B, is thinner towards the South Pole. This was caused by the use of chemicals called chlorofluorocarbons or CFCs, and it has been improving since they were banned by an international agreement in 1987.

And finally, the air in Australia generally has less smoke, dust and other small particle pollution than many places in the northern hemisphere. While this makes the air nicer to breathe, pollution does absorb or block some UV radiation.

Is UV changing over time?

We know UV levels have increased in recent decades.

It’s harder to say what will happen in the future, as there are several uncertain factors.

We expect the ozone layer to slowly recover from the impact of CFCs, which is likely to reduce UV levels.

Clouds are also likely to behave differently due to climate change, but we’re not sure exactly how.

Researchers in Japan found reductions in clouds and tiny particles in the air are expected to have a bigger impact than the recovery of the ozone layer, which would mean UV levels are likely to go up overall.

Regardless of the long-term trends, we’ll still be measuring the daily levels and letting the public know the important sun protection times. So keep an eye on the forecasts and remember to cover up, wear sunscreen, sunglasses and a broad-brimmed hat, and stick to the shade when the index is 3 or above.

The author would like to thank Dr Stuart Henderson, Assistant Director EMR and UVR Exposure Assessment at ARPANSA, for contributing valuable information and expertise.

The original article was republished with permission.

What do you seek?